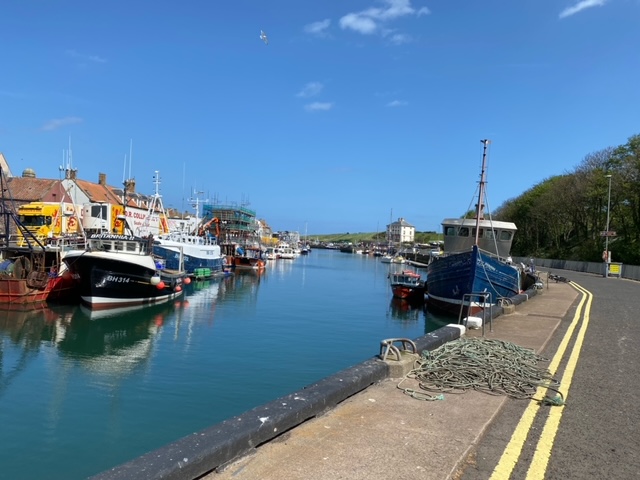 The second Trip of the year went ahead with the club visiting Eyemouth at the weekend. I say the second, but as the first was blown out, this would be the first time we were getting into the sea. It was the usual hectic Friday rush to pack our kit and hope the curse didn’t come true, well it was the 13th after all. Our luck held good and everyone who was going up that evening made it OK. David arrived a little earlier and managed to sort out a table at the local Indian where the boys from year 9 served the food. Our accommodation was with The Home Arms and the room keys had been collected for us so after a meal and a couple of beers we bedded down hoping for a beautiful day to dive.

The diving gods granted us the weather and as we were on the second boat we had a lay-in and then got to have a look around the harbour as well. The kit went in the van and off we went to board at the very civilised time of 13.00 for ropes off at 13.30. The weather was gorgeous and the sea flat calm. Graham our skipper put us in at the swim through onto Black Carrs. The visibility was, I would say, 5 to 6 meters. With a sea temperature of 6 to 7 degrees, the life was mostly lobster and crab but Nudibranch and Sea Hares were about and some fish. Liz reports seeing four fish. Although two were sleeping 😂 It is still very early in the season and I always like to see the difference in the life in the water for our first to our second visit in the year.

Back on the boat after a 45-minute dive and it’s nice to be able to have a hot drink again now Covid isn’t as bad as it has been. The shortbread was handed around by Charlotte as well. It’s always a good feeling to get that first sea dive of the year under your belt. Our skipper moved us on to Thrummy Carr for the second dive. The cliffs on the way up are alive with gulls, that is apart from the ones Keith and Amanda keep on their roof. I’ve always thought that it is very nice of them to give the gulls a home.

The second dive was as good as the first with plenty of things to see just get your torch under the crevices and it’s there but I didn’t see any wolf fish this trip. Tom got a nice pic of a small octopus. Back to port and a bit of a race to get showered and ready for the evening meal. We had a table booked at Oblo’s for seven but managed to get there early enough for a pre-meal pint they have a decent selection of food and it seemed to amuse Amanda that I was having sausage in cider ( can’t think why). It was a lovely meal enjoyed by everyone I think. We decided to move on to the Contented Sole for another beer and Liz was really happy that the Eurovision Song Contest was on (for some reason we always end up in Eyemouth when it’s on that could be something to do with Liz doing the dive calendar). I suffered for an hour but when Keith decided to turn into a glam rocker that was it, I went back to the hotel. However, it seems we won apart for a sympathy vote for Ukraine. (No surprise there).

Our second day of diving didn’t turn out as we hoped we were to be on the first boat out with ropes off at 8.30. However, when we got up sea fog had descended. Like good soldiers we got the van loaded and went to the boat and loaded our kit got our suits on and even cast off but it wasn’t too be because as we left the harbour the skipper realised that the fog was still coming in and decided to call the dive. So it was back to the harbour to unload and have the cooked breakfast that we missed.

I hope that all the divers enjoyed the weekend. I know that I did and it was nice to meet a new friend Steve Hayes. Welcome to the club! Many thanks to our skipper and his very helpful assistant. Then, with a lot of goodbyes and the long drive home, it was time to wash off the kit before Countryfile.