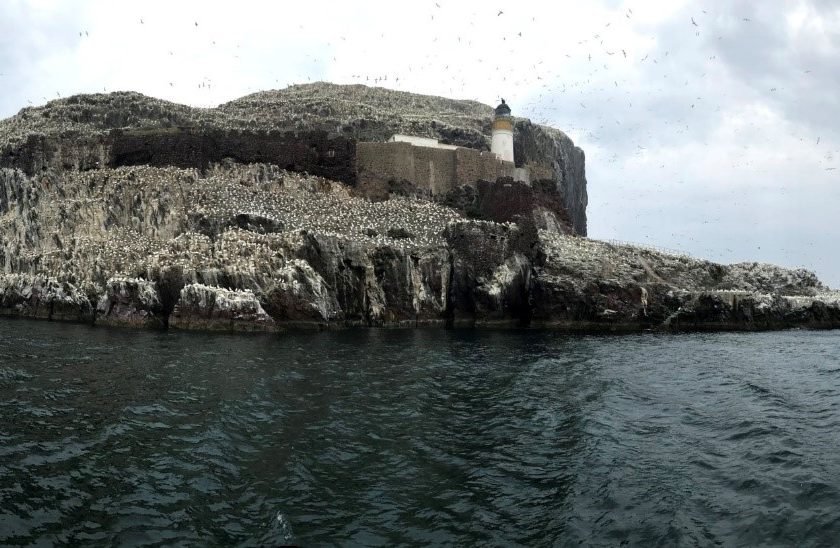 Despite some divers choosing to completely ignore the extensive information pack issued prior to the trip (you know who you are Pablo), the whole team eventually all gathered in Eyemouth on Friday evening.

After grabbing something to eat the weekend began with a few (but not too many) drinks to start the weekend in good form.

Saturday morning dawned bright and despite at least one lightweight complaining of a hangover (you know who you are Liz) we managed to load the boat and (almost) achieve the 8am ropes off target for the sail to Bass Rock.

Not far out of the harbour and the fog descended but our intrepid skipper Graham battled through and after a couple of hours Bass Rock majestically appeared out of the gloom.

The first dive was on the north wall which certainly didn’t disappoint with lots of life and everyone had a super dive despite a bit of current running.

After a spectacular surface interval watching the stunning bird life and chomping on Jaffa Cakes and Hob-Nobs we headed back to Fast Castle for our second dive. Unfortunately, the conditions had deteriorated somewhat but after a long and very bumpy sail we still had time for the second dive which was enjoyed by all.

Once back and showered it was off to The Ship restaurant for a scrumptious meal for 12 (not 18!) and then round to the Cutty Sark beer garden to watch the end of the England v Ukraine match. Not sure everyone in the bar was as excited as we were though at the 4-0 result! Ah well there’s always Qatar for you to try again next time Scotland….

Thankfully day 2 started on a sunny note and we headed back into the marine reserve for two great dives on Black Carr and in Guillemot Bay. Loads of life and colour including curious guillemots diving and flying underwater around us.

All in all, an excellent weekend, thoroughly enjoyed by everyone. Thanks to Gary, Graham, Jade and Alex at DiveStay for looking after us.